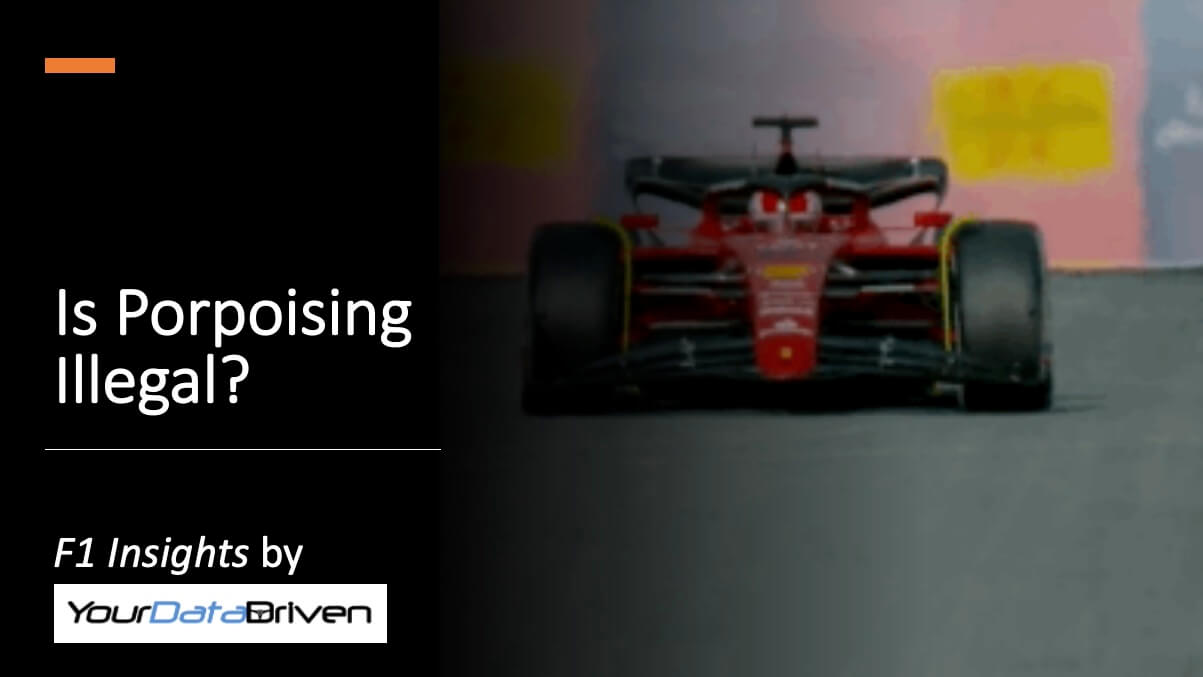 Is Porpoising Illegal In F1?

Watching the F1 2022 cars looks painful. The drivers look like they are bouncing a lot in the cars. Whilst those less affected seem disinterested, and those who are affected look for change, is there a bigger issue at hand? Could the F1 cars be breaking the law by subjecting the drivers to this much bouncing? Is porpoising illegal?

No one wants to see drivers suffering.

Clearly, this is an engineering challenge – or failure of initial design – that was hard to predict. The teams didn’t have the tools to model what was going to happen.

Without prior experience porpoising has caught most out. But where is the line?

You can infer from this video that it doesn’t feel great for the drivers.

More Than A Competitive Problem, A Legal One?

Stepping aside from the competitive issue for a minute. Here in the UK we have a legal obligation to effectively manage and minimise the amount of vibration workers see doing their daily tasks.

You need to have a data trace of vibration over time for this analysis. I don’t have this but I’m sure the F1 teams (or FIA) could run this to check.

If you’re reading, I hope you do.

I remember working on a couple of projects around this in the past (not that far back though!)
One was trying to determine how long was acceptable for a driver to sit doing durability testing of a dumper truck on Belgian pave.

Not long, is the answer!

We also did another piece of work for some military vehicles. The consequences of that always struck me as amusing, because if a light came on in the truck to tell you’d had enough vibration exposure whilst you were being shot at….I’m reasonably sure you’d ignore the light!

The point is these legal directives have been in place for a while. It’s only now that they may be becoming relevant to F1 teams.

Vibration in this context is defined as:

“mechanical vibration” means vibration occurring in a piece of machinery or equipment or in a vehicle as a result of its operation;

These links are to the legal regulations for whole body vibration exposure for workers in the UK:

This legislation concerns only the UK (although there is a European equivalent.) As most teams are based in the UK, we may find it is now applicable. Given most races are not in the UK, it is unclear to me how this affects F1 teams in practice. Whether or not they are still obliged to follow UK employment law when abroad is debatable.

Another potential issue is that most drivers are not employees but effectively contractors. Whilst any contractor working for a specific company still has rights, F1 teams and their drivers work in such an unusual and rarefied environment that normal rules often don’t apply or are simply irrelevant. Again I’m not sure where legally these issues fall within employment law, workers rights and an F1 company’s obligations.

I do know that the dumper truck drivers I worked with were freelancers. So my guess is the legal onus is still on the F1 teams. It seems reasonable that agency workers have a working environment that is acceptable from a whole body vibration point of view too?

What Does The Vibration Legislation Say?

There are two parts to the legislation.

One looks at hand vibrations, the other at whole body exposure.

“whole-body vibration” means mechanical vibration which is transmitted into the body, when seated or standing, through the supporting surface, during a work activity or as described in regulation 5(3)(f); and

For the whole body vibration there are three parts to this.

First is the way you calculate the total vibration exposure during a day (more on this below.)

There are then two thresholds. One threshold is a limit and one is an “action” threshold.

“exposure action value” means the level of daily exposure set out in regulation 4 for any worker which, if reached or exceeded, requires specified action to be taken to reduce risk;

My understanding then is the limit is the most that you can exposure your workers to during one day.

The action threshold is the point at which there needs to be some intervention. This could be to relieve the vibration, such as taking a rest break.

This is how you calculate the vibration exposure during the day.

In my research for this article I found many different methods for calculating this. Some methods give more weight to spikes of high acceleration, others smooth it out more. The one below is the one that made it into the standard and which is referenced in the legal documents. I understand, this method is one that smooths less.

What Is In Your Control?

There are two main bits to this formula. The level of the vibration and the time you are exposed to it.

More of either will increase the exposure number. Higher numbers are worse.

There is another calculation for a week but I’m choosing just to focus on race day. This is because drivers normally have a couple of weeks break between races.

Friday practice and Saturday qualifying could also be considered. You could make a kind of weekend exposure limit, but there are no legal precedents to this that I can find.

The other factor is that during practice there is no obligation – or at least not such a high incentive – to continue running the car for as long as a race distance. So I’ve decided just to look at Sunday but you’re welcome to build on from this if you like.

The limit and action thresholds are

The Direction The Porpoising Is Important Too

The “k-multiplying factor” in the equation above splits the vibration exposure into three directions.

Imagine you are sitting upright in a chair in a normal car.

I understand that the body has different tolerances to vibration in different directions. So the legislation has three different sets of k-multiplying factors for each direction:

It sounds more complicated than it is! But these figures might make the difference between porpoising F1 cars breaking the law or not.

I have estimated a vibration exposure from the onboard video and I’ve plugged in 2 for aw. Clearly it is a guess, but I needed something to plug into the calculations below.

What you can see below are the calculations for each direction. You can also see some limits that may be of interest in F1 for tracking purposes.

This tells you that for a 2 hour race (7200 seconds) vibration exposure aw(T) = 2, would mean the driver is over the legal thresholds in both x and y.

In z, they are under the limit, but over the action threshold, meaning some intervention would be required. In practice I’m not sure what that would look like mid race.

Again the 2 is my guess but it would be interesting to know what the real numbers are?

Flipping this for anyone reading who does have the actual vibration numbers.

If the driver sees aw(T) of

If they don’t do this, then the F1 team could be breaking the law?

Consideration For The Axes

The x, y and z axes used are not the car, they are relevant to the torso of the driver.

This becomes important because the thresholds are higher for vertical vibrations than others.

Is Porpoising Illegal? A Summary

The purpose of this article is to raise awareness of a potential legal situation for the F1 teams. It was one that struck me when I saw Lewis Hamilton struggling to get out of his F1 car at the end of the Baku 2022 race.

For anyone reading it hopefully this article will add your discussions. In particular about the effect porpoising is having on driver welfare and health. However “un-macho” and “health-and-safety-gone-mad” pointing this out may seem to some.

Is porpoising illegal in F1? I don’t know but a constructive way forward might be to look at the legal, rather than sporting, perspectives to prevent drivers getting injured? Weekly motorsport insights that you can read in 5 minutes, for free.

Forget vagueness. Get clarity on how to make you, and your car, faster on track.