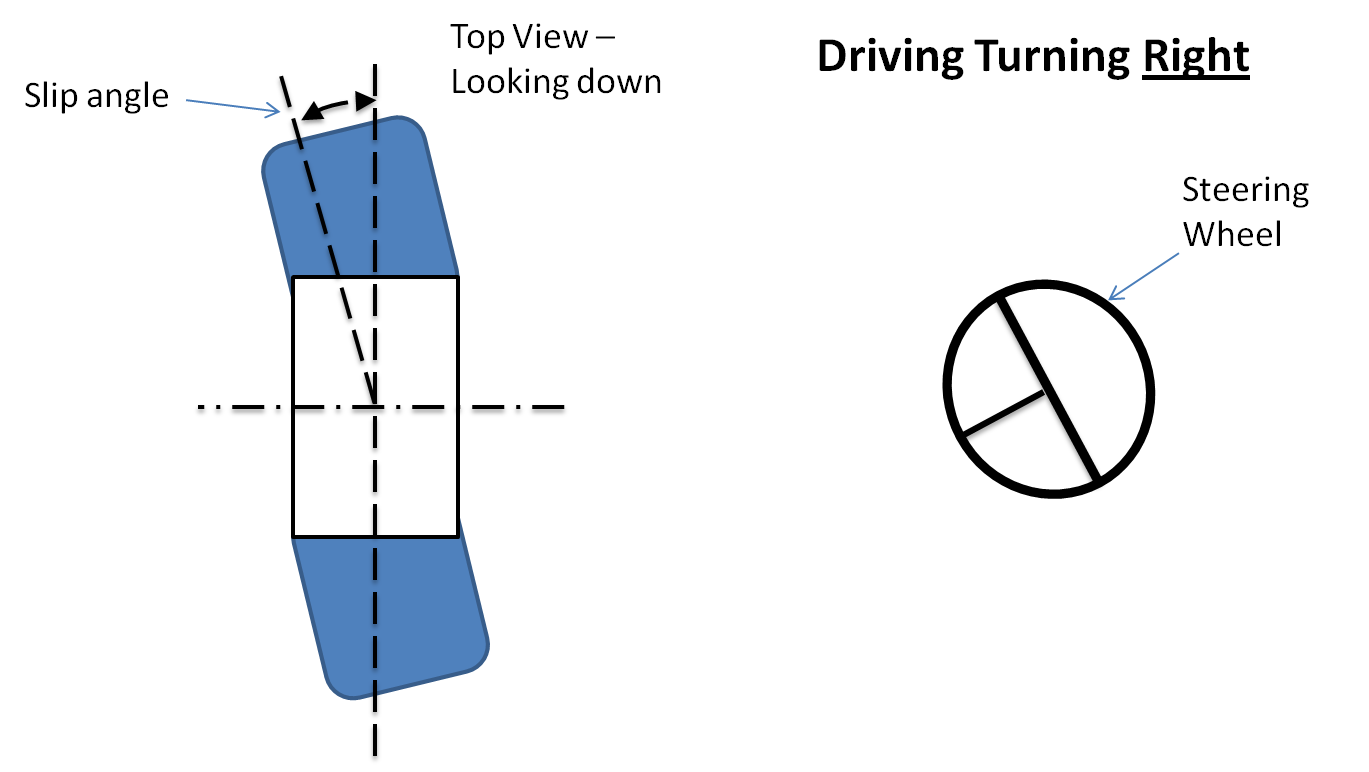 This post gives a brief introduction to the subject of slip angle and why it is so important to going faster in a racing car.

Understanding slip angle, or more precisely “tyre slip angle“, is fundamental to understanding how to go faster on four wheels. I hope this note is useful to people.

In the case of a racing car, the less you have to slow down, the quicker you can do a lap/complete the stage/get up the hill etc …

At this point it might be worth making the distinction quickly between four wheels and two. The primary way of generating cornering force on four wheels is through slip angle. On two wheels the dominant way is through “camber thrust“.

To understand camber thrust think of what happens when you roll a coin along a table; as it slows down and leans over, it will start to circle around. The lean of the coin causes camber thrust and this causes the coin to change direction.

Two wheeled vehicles, like motorbikes, can be leaned over which allows them to generate their cornering force through camber thrust.

Four wheeled vehicles can’t lean like two wheeled ones so they need to generate their cornering force primarily through tyre slip angle instead (explained more fully below.)

Clearly there is a little overlap as you can add camber to the wheels of a four wheeled vehicle (either static, roll or through compliance) which can generate camber thrust.

It is true it has an influence. However, the main mechanism of generating cornering force with tyres on an F1 car is through tyre slip angle.

Think of a rubber (an eraser.)

When thinking about slip angle, one way I have found helpful is if you imagine holding a rubber eraser on its end and pressing it into a desk:

While pressing the eraser down on the desk, imagine twisting it. The rubber will resist both you pushing it down and you twisting it.

The reason is that rubber has elastic properties. It wants to retain its original shape so resists your attempts to force it otherwise. In practise, this means it will resist your twisting force until it slips on the desk.

Interestingly and importantly, the harder you push the rubber down on the desk, the more twisting force you can apply before it slips on the desk.

This is an important concept to have in your mind when trying to understand the subject of tyre slip angle.

Have a look at the diagram below:

This shows a picture of a wheel and tyre on the left. On the right is a graphic of a steering wheel.

In this picture we are driving straight ahead. There are no forces on our car that are trying to turn us or deviate us from our desire to drive in a straight line.

Thinking back to our rubber eraser example, this is the same as holding the rubber on the desk and pressing down without twisting it.

This second diagram below shows (kind of) what happens when you turn the steering wheel.

The diagram aims to show that when you turn the steering wheel, the tyre twists on the wheel.

This alternative diagram from Wikipedia aims to explain the same thing:

Both diagrams aim to show that turning the steering wheel creates a similar resistance to the twist in the tyre that we had from trying to twist the rubber eraser on the desk.

A rolling tyre generates cornering force when twisted relative to the wheel.

In practise a tyre is slightly different to a rubber eraser. Also, my analogy is a little flawed as the rubber eraser is not rotating like the tyre, but, I hope, the concept holds good enough for people to understand that the twisting of the tyre creates the tyre slip angle that creates cornering force.

All other things being equal, the more slip angle you apply, the more cornering force you can generate.

However, this relationship doesn’t last forever and eventually the tyre can give no more cornering force for the extra slip angle.

When a tyre can’t generate any more cornering force it is at the limit of grip. It is what you’ll experience as a racing driver when you try to corner too fast.

Luckily you can do something to increase the cornering force that a tyre can generate; by pressing down harder on it …

The benefits of pressing down harder on the tyre.

The diagram below hopefully shows this quite nicely. It uses Lateral Force for cornering force.

Hopefully you can see that the cornering force generated for each degree of slip angle increases with more downward pressure on the tyre.

Great news but how do you increase the downward pressure on the tyre?

To increase the downward pressure you can broadly do two things; either make the vehicle heavier or use aerodynamics.

Heavy vehicles are slower because they require more energy to accelerate to the same speeds at the same rate, as lighter vehicles; just think about how much easier it is to quickly lift a light dumbbell compared to a heavy one.

If you only have a fixed amount of energy available, or, put another way, a fixed amount of power available from the engine, then you really want to have as light a vehicle as possible. The lighter vehicle will help you to accelerate quicker and therefore go faster.

It is for this reason that aerodynamics is so important in motorsports, especially Formula 1.

The best way to enable more cornering force potential is to generate more downward pressure on the tyres (through the aerodynamics.)

Interestingly, in other Motorsports series, aerodynamics is not the main performance differentiator as these other factors I have mentioned are not the same – drivers in particular.

Hopefully this has given a little more insight into what slip angle is all about.

Please drop your email below this article if you found it useful. All feedback is appreciated as I am looking to appeal to people who have an interest in understanding this subject but not necessarily the technical experience.